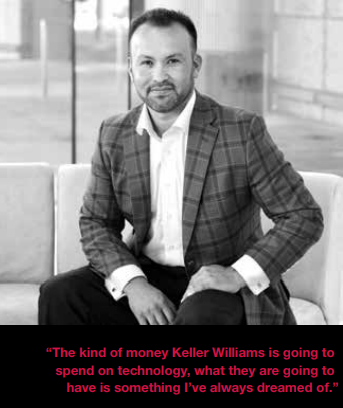 Every day, top-producing agents are turning heads as they make the move to Keller Williams. While the reason for making a brokerage change is personal for each and every agent, the desire to grow personally and professionally is evident in all.

After returning from their annual New Year’s retreat to the woods of Central Virginia, Debbie Wicker and her husband and business partner Tad Wicker knew they wanted to change brokerages. Though Debbie had been an accomplished agent with RE/MAX for almost two decades, she and Tad wanted more favorable financials and better support for growing their team.

Five days later, Debbie received a call from a Keller Williams agent from the Dulles market center, followed by an invitation from the team leader to attend Family Reunion. As Debbie says, the rest is history: The Wickers joined Keller Williams on March 1, 2016. Debbie and Tad finished that year with a 12-month total closed volume of $40 million and 75 units, a significant increase from the year prior.

At Family Reunion, the Wickers experienced Keller Williams’ culture and resources, including the company’s core values of God, family, then business. Debbie’s “aha moment” happened when she arrived five minutes into a presentation early Sunday morning. “I walk into this room and it was supposed to sit around 700 people and there were easily 1,400. I thought, OK, there is something going on here.”

Tad was likewise impressed, particularly with the transaction numbers shared by session panelists. “We’ve been in national coaching with some big-name organizations and have never seen numbers like that,” he says. “It was such a no-brainer of a business decision.”

Since the move, the Wickers have been awarded their office’s Culture Award and Debbie has become a member of the Associate Leadership Council. Among the benefits of joining Keller Williams, the Wickers note the importance of their team leader being

﻿Jorge Mier is no stranger to personal growth. The Zacatecas, Mexico, native has built a successful real estate business in the Denver Southeast market center, while making time to travel the world and cycle thousands of miles each year. So it was a natural extension of Mier’s spirit when he wanted to take his real estate team to new heights. In April 2017, after more than 12 years with RE/ MAX, Mier joined Keller Williams with a 2016 12-month closed volume of $20.8 million and 85 units.

Mier was ready for the move when he realized he wanted a brokerage that encouraged continuous improvement instead of satisfaction with the status quo. Among many things, it was KW’s determination to bring agents truly innovative technology that swayed him. “The kind of money Keller Williams is going to spend on technology, what they are going to have is something I’ve always dreamed of.”

Mier’s biggest concern was that his Latino clientele identified with the RE/MAX brand, but he quickly found they were more interested in his own beliefs and values. Since taking the leap, Mier says he’s been amazed at how determined agents have been to help him succeed.

“I had never had that before,” he says. “Most of the companies out there want to keep it secret. It opened my eyes to the things that I can do.”