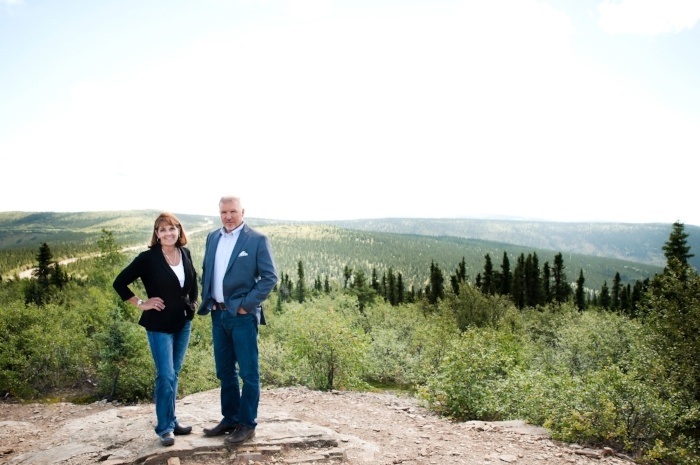 Bundled in thick scarves and warm coats, Dar and Ed Walden were out navigating Anchorage’s icy roads when the call came in.

Stopped in a snowy parking lot, the co-owners of the Anchorage, Alaska-based Dar Walden Team found their friend Matt Wagner – owner of an ad agency for the real estate industry – on the line with big news. Wes Madden, a fellow client, was toying with the idea of selling his Fairbanks-based independent brokerage, Madden Real Estate, Alaska’s top real estate firm.

Six days later, the Waldens boarded a plane to Fairbanks to meet with Madden. Less than 60 days later, they merged to create the largest real estate firm in the state. The deal put the Dar Walden Team on track to sell more than 700 homes in 2017, more than four times the 168 they sold in 2016. The Dar Walden Team has consistently ranked in the top 1 percent of real estate professionals in the United States, and they became a mega agent office the day Dar and Ed purchased the Madden group.

The acquisition is a prime example of how – as listings become tighter and tighter – agents must get creative in how they take market share. Mergers and acquisitions are an excellent way to grow market share, expand your geographical area and boost sales.

The Madden acquisition gave the Waldens an immediate 25 percent market share in Fairbanks. It was their fourth merger after three smaller ones in Anchorage. It’s a strategy that has served them well as they work through a recession in Alaska, which currently holds the highest unemployment rate in the United States.

A City That Made Sense

Fairbanks wasn’t an urgent expansion target for the Waldens, a California couple that made their way to Alaska after Ed was transferred to Anchorage with the military.

The day the Waldens received the call from Wagner, it was 40 below in Fairbanks. The Waldens also co-own Keller Williams brokerages in Reno and Sparks, Nev. and a business center in Elko, Nev. Somewhere warm beckoned for their next investment. Ed says he was even considering investing outside of real estate, in a Dunkin’ Donuts or Krispy Kreme. But Fairbanks, the largest city in Alaska’s interior, made sense.

The city, where an average home costs $230,000, is made up of three distinct resident groups: a sizable military community that rotates in and out of the area, oil and gas workers, and lifelong Fairbanks natives. Soon, an expected 3,500 active military members will arrive in town. Outside Fairbanks at Eielson Air Force Base, the population will likely double by 2022 following the arrival of two squadrons of F-35 interceptors, with $298 million in projects underway.

Madden had spoken to other investment firms about a merger, but once he knew the Waldens were interested – they had socialized at several events, and got along well – the deal moved fast. “If you find someone at this level, and they’re willing to sell and you’re in a position to do it, really think about jumping on it,” says Dar, who has been in real estate for 17 years, the last nine with Keller Williams.

Lawyers drew up contracts, but the Waldens did much of the negotiating themselves. In Fairbanks, they stayed with Madden and his wife in their home. They spent their days combing through contracts, and their nights going back and forth about their vision for the transition over beers on the Maddens’ couch.

“We see Wes as our business partner, and wanted to start out on the right foot,” Ed says. Dar chimes in, “We all knew we had a lot of people relying on us for their paychecks, so it had to be done right. There was no room for error”.

The Waldens ultimately decided to keep the Madden name, a respected brand that Madden built up over more than a decade. They also asked Madden to stay on as a minority owner for a few years.

“Fairbanks is a tight knit community,” says Dar. “We knew we couldn’t just come in, plant our feet and change signs. The changeover is very gradual. Keeping Wes involved in the business is important to a successful transfer.” Ed adds, “You have to take the ego out of it. You need to consider what’s best for the business’ success.”

In late April, from a Madden office in downtown Fairbanks and one outside the city in the North Pole – a log cabin adjacent to the Santa Claus House – the Waldens coordinated the changeover of 100 signs overnight. Team members stomped through snowbanks to swap signs with new ones printed with the Keller Williams logo. “It was total teamwork,” says Dar.

Madden ran his business like a Keller Williams mega agent team even though it was an independent brokerage, and that made the transition easier, the Waldens say. But the merger still had its share of challenges. Madden agents never had an agent commission cap; that’s taken some getting used to, says Dar. Out of the 18 Madden agents, 13 decided to stay after the merger, including Greg Baldwin, who started out as a buyer specialist at Madden Real Estate in 2013.

“The synergy [between Madden and Keller Williams] is awesome,” says Baldwin, “and everyone here is super excited about the company, the trainings, the systems and the technology that Keller Williams has brought to the table.”

Two major benefits, adds Baldwin, are the connection agents now have with colleagues across the country and their ability to provide the full scope of services to clients moving in and out of the state. “It’s been a seamless transition,” he says “and all of us are excited to be a part of a big team.”

For Ed and Dar, it’s been challenging to transfer accounts and recurring business expenses. And ferrying between Anchorage and Fairbanks has been hectic. The Waldens spend two to three days in each city, rent an apartment in Fairbanks and are looking to buy a car.

“We’re being pulled in a lot of directions,” says Ed. “But we need to immerse ourselves in the Fairbanks community. They need to know us. It takes away a little bit of your freedom, but I think the investment will be huge.”

In Fairbanks, the new team helped out at a local food bank for RED Day, and the group has donated money to four local high schools and sponsored a table at a military appreciation dinner. The team also recently sponsored an autism run in town.

As for advice for other teams looking to acquire, the Waldens say “take the risk” and take advantage of the support Keller Williams offers. They credit Keller Williams staff with helping to make their merger a success.

Bruce Hardie, regional director for the Northwest Region, visited the team in Fairbanks and led a class for agents. “Bruce was a great sounding board,” says Dar. “He really helped us with the transition.” For now, the Waldens are content with their team; no more mergers are on the horizon. But “the door is always open,” says Ed. “If the opportunity presents itself, and it’s the right opportunity, we wouldn’t say no.”