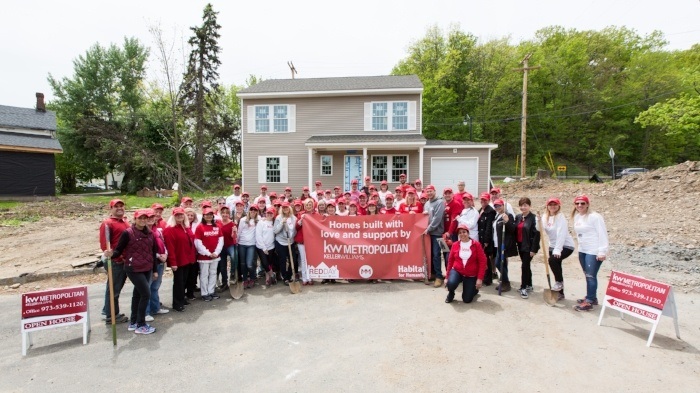 For 14 weeks, February through May, associates from KW Metropolitan worked tirelessly to build four homes for veterans and single-parent families headed by women at a Morris Habitat for Humanity project on Harding Avenue in Dover, N.J.

Nathalie Figueroa is both: a veteran and active in the Army Reserve as a military police officer and a mother of a young son. She is still in shock that she’ll be a homeowner, a dream she thought she’d never realize.

Figueroa was prompted by her mother to apply for Habitat for Humanity, which she did in February. She took a two-day course that explained homeownership, financial responsibility, the process of having a mortgage through Habitat and her 300-hour sweat equity obligation. In April, her application was drawn and she was selected to own a three-bedroom home with two bathrooms that she will share with her grandmother.

“I was in shock, it was pretty amazing. I never really won or received anything,” Figueroa says.

She is in awe of the many volunteers who have worked on her home, including the Keller Williams associates.

“That’s amazing how people volunteer for free to help out,” she says. “I’m going to volunteer and help out with the awesome things that they do.”

KW Metropolitan’s involvement with the project was a natural progression. Since opening their doors in 2012, the market center has participated in Keller Williams’ annual day of service, RED Day – which stands for Renew, Energize, and Donate. Meaux realized after last year’s event that her team – which had grown to more than 300 – wanted to do something bigger.

After Habitat for Humanity reached out to Meaux with the volunteer opportunity she turned it over to the office’s cultural committee co-chairs, Denise PittsMortenson and Cathy Lutz. The duo spearheaded the effort and organized the volunteers week after week from Feb. 3 to May 11, when the project culminated with more than 100 Keller Williams associates hard at work on the build site and ReStore. “They took off with the idea and nailed it!” Meaux exclaims.

The experience was a triple win for the office. They learned something new, they gave something back, and they walked away with a smile. “A lot of people felt that way,” says Pitts-Mortenson.

Associates did anything that needed to be done, from painting, to landscaping and tiling. Lutz remembers marveling at her colleague’s attention to detail and level of dedication. “What I saw was – without being told – they cared about doing it right.”

Matt Bilheimer, director of agent services for KW Metropolitan, says being involved “opened my eyes to home construction elements from start to finish.”

In his current role, he’s not directly involved in the home buying and selling process, but was glad to learn about other methods for people to find and purchase a home. He was surprised to learn that Habitat for Humanity homes are sold to home partner families and are financed through affordable long-term loans. Homeowners have to qualify for a mortgage and put in sweat equity hours. “They have to put in all this time and all this effort – and pay for it,” he says.

What Blair Schleicher Bravo, CEO of Morris Habitat for Humanity, noticed was the group’s energy week after week.

“The Keller Williams group was probably the most excited, happy and engaged group we’ve had in a long time,” Bravo says, adding that on May 11 when the project culminated, “they all left tired, dirty and happy.”

Morris Habitat typically has seven to eight projects going, building 10 to 30 homes, at any time. This year 32 homes are under construction, including several multi-home sites like the Harding Avenue project, Bravo says.

“It’s unusual to have such a long-term commitment on a Habitat project. Having the same team come back week after week builds skills and confidence of the volunteers and helps families get in their homes sooner.”

Another homeowner on Harding Avenue is Dahiana Marte. Currently, Marte and her three boys – ages 11, 6 and 2 – live in a one-bedroom apartment where she has to go into the bathroom to have a private phone conversation. Soon they’ll spread out in a threebedroom home.

“People you don’t know doing this for you. We’re blessed, we’re humbled, we’re honored,” she says with a sense of disbelief. “Never in a million years would I have thought this would happen. I feel so blessed, thinking that they’re contributing to something for me and my kids.”

Contribution is at the “heart of our organization and Keller Williams culture,” says Mo Anderson, vice chairman of the board at Keller Williams Realty International and one of the most vocal champions of RED Day.

“Every year, as our company grows, so does the power and impact of the community contribution we can make collectively. I know I speak for the entire Keller Williams family when I say that giving back is one of our greatest joys!